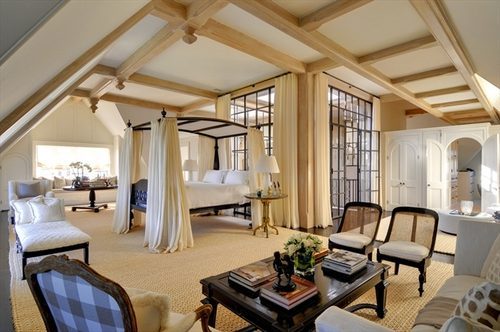 Vince Camuto, the shoe mogul who launched the famous women’s designer footwear brand “Nine West”, has reportedly gone under contract to sell his estate in Southampton, New York, for a whopping $75 million, according to reports.

If he closes in on that much, he will end up earning a good $27 million over the $48 million asking price.

Camuto listed the place sometime back in July 2013. Not much is known about when and how much Camuto and his wife purchased the place for but they apparently own almost around 14.2 acres of land. However, the home that just sold sits on a 5.5 acre lot.

The home spans an area of 9611 square feet and comprises of ten bedrooms and ten full and one half bathroom. Interiors feature light hardwood, marble and carpeted flooring with high wood-beamed ceilings. Glass doors and windows outline each room. The kitchen has beautiful cabinetry and a mid-rise island too.

Listing photos show large rolling greens, a plush pool, a tennis court and ample recreation spaces in the exteriors of the residence.

The listing at Corcoran describes the place as:

Panoramic views extend from sunrise over the Atlantic Ocean to sunset over Lake Agawam. The grand 10,000 square foot residence, offered on 5.14 acres (additional acreage available) with 472 feet of direct oceanfront, originally built over 8 decades ago and designed by the revered architectural firm Treanor & Fatio, was one of the grandest original summer colony residences. The classic English Tudor style home Wooldon Manor enjoys a pedigreed past with owners such as the Woolworth dynasty and Edmund C

Apparently, Camuto has a thing for old and historic buildings. More recently, his darling renovation project, the Villa Marie, was featured in the July 2013 issue of the Architectural Digest.

“There was something magical about the place. Though the nuns couldn’t afford the upkeep or the taxes, they wanted a buyer who would take care of it,” Camuto said to the publication.

“Louise and I told the sisters we wanted to restore it, no matter how long it took, and we wanted to live there,” he added.

Camuto co-founded Nine West in 1978 and then sold the holdings to Jones Apparel Group in 1999. He was the ultimate shoe designer. He now heads the Camuto Group, which is into design, marketing solutions and also runs a fashion brand in his own name.

“If you look at the successes of the best companies in America, it was the culture that was built and remained long after the principals weren’t there. It’s never about one person. It’s the teams you put in place. Without the right people, you’re nowhere,” Camuto told WWD.com for a Lifetime Achievement feature.